I want you to come with me on a short journey to San Antonio, Texas where I recently went on a business/leisure trip. While there, I learned a ton even though I was not there for any type of formal internal or external training program.  What I learned came from learning by using my five senses as I meandered in and around San Antonio.

If you have never been to San Antonio, it is a feast for the senses especially on the Riverwalk.  It is a great place to use all of your senses to become acutely aware of what is going on around you and grow personally.  I had several “ah-ha” learning moments on my trip.

Beliefs when no one is looking (Sight)

One of my favorite landmarks in San Antonio is the Cathedral of San Fernando.  It is a beautiful ornate church in the middle of downtown San Antonio.  Davie Crockett is buried there.

On a visit to the cathedral while I was preparing to take a picture, I saw an unassuming man riding on his bike in front of the cathedral.  As he passed the third set of doors, he made the sign of the sign of the cross – a religious action showing belief and respect.  As he rode away, I stood there for a moment to allow what I saw sink in.

Here was someone whose beliefs were so deep that even when no one was looking, he demonstrated his conviction to them. This sense of loyalty and integrity is what we hope for with our employees.  When no one is looking and it is easier to do nothing or the wrong thing, the employee’s own integrity and beliefs will guide them when no one is around.

I went on a day-long wine tour of the vineyards outside of San Antonio.  (Yes, they do make wine in Texas. Yes, it is good.)  The group of people touring with me included an older couple from northern California and five millennial females.  At first, the millennials kept to themselves, but as we got out of our tour van, I started talking with them.  One owned her own small business.  Two worked in technology for a fortune 100 company.  One was celebrating a birthday.

After the tastings at our first winery, our tour guide asked if the group preferred to head to more wineries that were known for their red wines or white wines.  The five millennials and the couple answered with red wine tour.  I was the lone white wine vote.  I told them I was there for the experience and would be happy to go wherever the majority wanted.

With that statement, the millennial group seemingly took me under their wing.  At each of the additional wineries we went to, they were concerned with my palate – – – asking how I liked the wines, did I have a favorite, was I having fun.  Through these wine discussions, I learned more about them and them about me.  By the end of the tour, I was able to connect one with a possible job opportunity (my comfort zone) and they encouraged me to learn about the distinct flavoring of agave liqueur (out of my comfort zone).  They cared that I was having fun.

My time on this tour even more cemented why we should not to judge people based on articles highlighting the tendencies of an entire age group.  On that Sunday afternoon in Texas, the millennials I was with broke many of the stereotypes attributed to them.  Bottom line, talk to people to learn about who they are. 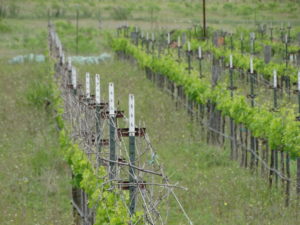 Learning from the vines in Texas wine country

Back to my wine tour, we spent about an hour in the van to get to San Antonio wine country.  During that time, I had time to reflect on my business and some interesting trends I had been seeing in the job candidates I was recruiting for a contract job.  I was filling technology roles that could be located anywhere in the U.S. and received about 20% of potential candidates from large cities in Texas, with none of them from Austin (considered an upcoming technology area).

Since my tour guide had lived in Texas his entire life, visited most of the state, and was well-spoken on all of the information – wine and the history of Texas – he provided us, I thought I would ask him why I might be seeing this trend.  He immediately had an answer.  Since the oil prices are down, the refineries that have headquarters or large offices in many of the major cities in Texas were laying off employees.  Not only were they laying off employees, their vendors and contractors were laying off employees as well.  In a couple of minutes, he filled in a lot of the blanks I had about why I was seeing an influx of Texas candidates.  (Recruiters, you may want to make special note of this.)

If I did not ask him, I would have kept guessing or possibly spent time researching why.  Resources for your organization are all around you.  Sometimes you have to be creative or even a bit lucky to find resources out of your standard list.  The insight that is available is endless if you look outside the lines.

Why being one gets people undone (Sight, Smell, Taste, Touch)

San Antonio’s Riverwalk is filled with many fantastic restaurants.  The smells drifting from each truly help you decide where you want to eat.  For dinner one evening, I was on my own and decided to try out a famous Mexican restaurant.  I walked up to host station and asked for a table for one.  When I said this, the host looked uncomfortable because I was a party of one.

I waited patiently for my table.  Around me, were other patrons of the restaurant who smiled awkwardly at me. They knew I was a party of one.  They looked uncomfortable too.  When the host called my name, they sat me at a large table for four.  My server, seemingly unaware that I was there, walked by my table three times before I asked him to take my order.

He asked “Is it just you?”  I shook my head and he became impatient because he had larger groups of tables to wait on.  He took my order, but failed to bring me the requisite salsa and chips.  Again, I got his attention and he reluctantly brought them.  When my food came, I enjoyed every bit of my meal.  I thanked him several times for the great dinner.

There are two takeaways from this experience that I want to share with you.  First, it should not matter who you are, an individual seeking a good meal, a minority being interviewed for a job, or someone of a different sexual preference obtaining services, we all deserve the same quality of response.  Second, someone needs to educate servers that single parties can and will tip as well as a larger group if you provide good service.  Expanding this out, treating everyone equal will not only improve your bottom dollar, but strengthen your brand.

My un-experiment turned into a great self-learning experience.  I had immediate takeaways to use and share.  My thought-shift was immediate.  The next time you have the opportunity do a un-experiment like this, learning from all 5 of your senses, I dare you to do it.  You might be surprised at what you learn.